Two of our six hoop houses

At this time of year polyculture is vital to us in the hoophouses. This valuable but limited space has to be utilized fully, especially since growing tender crops outside can be difficult in rainy years. What we do to maximize the space is to transplant new crops between those that are going to be harvested imminently. This is a tricky business. Here are some tips on what has worked for us as well as a few instructive missteps:

The lettuces in the above picture have had their outer leaves harvested for salad mix weekly for at least six weeks. At some point, they are going to need to be taken out completely. By then the Ruby Streaks mustard will have filled in the space. Look at this time lapse sequence of a similar situation: 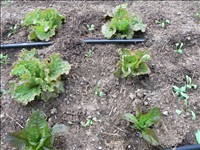 Here you can see Mibuna mustard slowly overtaking the constantly-harvested lettuce they are planted between.

Sometimes the timing of this cohabitation misfires. Above you can see some vigorous endive overtaking the spindly arugula that were transplanted in between them.

The arugula was much happier in this bed. Here arugula and pea transplants were put into the bed around the same time. The peas are climbing strings, allowing the arugula to flourish. By the time the peas are large enough to shade the arugula, the arugula will be harvested for salad mix or as a bunched item.

Here is another example of crops being stacked in time. In this bed, the row of radish down the middle was sowed in early February at the same time the Asian broccoli was seeded in potting soil in flats in the greenhouse. By the time the broccoli transplants were ready to go into the hoophouse bed four weeks later, the radishes were teenagers. Two to three weeks after that, the Asian broccoli will be taking over the bed and the radishes will be ready to harvest.

Of course, using this space so intensively means taking special care of the soil. We add compost between each crop, sometimes three or four times a year. Watering is also important. With crops spaced so closely, overwatering can cause fungal diseases. Hoophouses, with their plastic covering, recycle water very efficiently. Only water when the surface is dry! Air circulation is vital as well; our hoophouses have roll-up sides that we open whenever possible.

Nature has a way of experimenting with a range of varieties, timing and niches. Although farming is not a natural system, we try to mimic nature by creating a varied ecosystem in our hoophouses. The care and effort we expend is amply rewarded with a bounty of Spring greens.